By Edward M. Bury, APR, aka the PRDude

Hours from now, ghosts and goblins, and other scary creatures — for example Lady Gaga and former Illinois Gov. Rod Blagojevich — will be scampering up the stairs of our Chicago home to commemorate an annual pagan celebration now fully commercialized and called Halloween.

Once a relatively quiet holiday just for kids, Halloween has exploded into a multi-billion-dollar industry.  Did you know more than $1 billion is spent on fake cobwebs, tombstones, pseudo monsters and other outdoor decorations alone?  Quite an impressive sum, especially knowing this explosion of Halloween hoopla happened in the past few years.

This development is ripe for sound public relations strategies and tactics that can help building awareness, acceptance and action for a product, service, cause or candidate.  Here are some suggestions from the PRDude to help guide marketers and communications for Halloween 2011.  For the record, tonight I’m dressing up as a grumpy middle-aged guy and we’re giving out Butterfingers.

Well, it’s getting near the witching hour and the doorbell has sounded.  Now, where’s those *&#@% Butterfingers.

By Edward M. Bury, APR aka the PRDude

When I launched this blog last fall, my focus was on two topics: Public relations and my search for another great full-time position in the communications industry.  Proud to say I can cross off the second topic.

First, I must thank everyone who read my thoughts, especially those who offered commentary. It’s tremendous to know that my observations and perspectives enlisted a dialogue in the blogosphere.

Second, I’d like to share some insight related to my search; hopefully, the following will be of value to those seeking a new opportunity.  Without any order of importance:

What did I gain since last fall?  A tremendous sense of self-worth, much more confidence, a greater understanding of social media and a cadre of new friends and colleagues.  What did I lose? Not much, really, except for a couple of pounds!

With my goal realized, I have to shift focus for the PRDude blog.  I’ll still address public relations, marketing and related topics.  But now, I’ll concentrate on the “lighter side” of the profession.  In fact, I dabbled with this theme in a few posts already.

There are a lot of great blogs that tackle serious issues facing the industry; I’ll be a bit more irreverent and hopefully funny.

Again, sincere thanks to all who have spent a few minutes reading my thoughts.  See you in the blogosphere soon.

By Edward M. Bury, APR, aka The PRDude

For some reason, we need to make comparisons between old and new.

Since the end of the Civil War and to the present, we read about the emergence of the New South, embodied by progressive social, business, political and cultural movements and a transition from the way things were for decades.  In 1985, one of the world’s best-known brands was re-introduced as New Coke, a new formula for the iconic soft drink; it didn’t last, as consumers demanded the old stuff.

Earlier this week, PRSA Chicago hosted an excellent luncheon panel discussion on a topic that tackled the subject of old vs. new: “Making Old Media New Again.”  The excellent panel was moderated by Harlan  Teller, Of Counsel at FD, and was comprised of Joanie Bayhack, SVP Corporate Communications/Direct Marketing at WTTW-TV, Julian Posada, founder of Cafe Media and Joyce Winnecke, VP/Association Editor at the Chicago Tribune.

Before I give my thoughts on old vs. new media, here are a few bullet points that grabbed me by the proverbial collar:

Outstanding insight, although I disagree with the projection that website are becoming passe.  (Where would those short links in Tweets link to?) Now it’s my turn.

The “old” media vs. “new” media debate really is not, well, a new issue.  In its essence, “media” has been in existence, one can argue, since 1453 when Gutenberg employed a printing press and movable type.

Each of these forms of communication have had to re-invent itself to survive, thrive, inspire, challenge and remain relevant.  Here’s an example during my lifetime.

I recall the launch of USA Today in 1982 by media powerhouse Gannett. The nation already had a tremendous national newspaper in the Wall Street Journal.  But the Journal clearly was speaking to the business audience; USA Today was speaking to everyone, and it pioneered the incorporation of color photos, banners and graphics — tactics used by all newspapers today, those precious few that still publish.

Research showed the people at Gannett that the nation would buy and read a national newspaper that covered breaking news, sports and features, as well as business news.  Technology allowed publication nationwide and use of color.

Back to the debate in question.  “Old” or “new,” media still remains the way we deliver a message to an audience beyond the person in front of you. It will continue to evolve based upon market demands and technology.

To paraphrase a Billy Joel song from three decades ago: “Everybody’s talking about the new kind of communications but it’s still media to me.”

It\’s Still Rock and Roll to Me

News out of Pyongyang this past weekend, was, by all accounts, festive.  On Sunday, the secretive state of North Korea held a series of very public parades and other events to honor the 65th anniversary of the Workers’ Party, which rules Communist nation.

But beyond the spectacle created by massive numbers of civilian performers in colorful costumes, soldiers marching in perfect goose step fashion and trucks pulling some nasty-looking missiles, the real purpose for the celebration was to introduce the next leader/dictator/ruler of the nation to the North Korean people and the world. 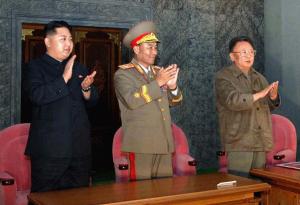 The chubby guy in the dark suit can reinvent North Korea with some solid, strategic public relations counsel.

If the experts are correct, Un is being groomed to follow in his father’s footsteps and take command of the nation sometime down the line.  When that happens, the rogue nation has an ideal opportunity to shift world perception: North Korea can reinvent itself from being a repressive, war-mongering place that dabbles in nuclear armaments and stifles free-thinking of any kind to an emerging democracy destined to take its place in the brave new world.

Well, emerging as a democracy may take some doing.  But North Korea can build better relationships with its neighbors and the rest of the world if it follows some solid, fundamental public relations principles.

Not much chance that happening under the current government — and calling it a government is a misnomer — but perhaps Un can lead the country down a new path to peace, prosperity and the free exchange of information and ideas.  Here are some suggestions, based on the four key steps in developing a sound public relations plan.

I’m not sure North Korea has the resources at the moment to launch an effective public relations program. According to a post last year on the PRoper Learning blog, the nation has a one-way policy in terms of freedom of speech. You guessed it: Pro government only.