Yes, Seattle was a tremendous place to visit, as I noted in a post earlier this week.  Well, at least what I saw when not tethered to the Washington State Convention Center as a participant in the 2012 Every Building Convention & Trade Expo organized by BOMA International.  (Remember, I work on the association management/real estate side of public relations; the BOMA mid-year event is the office building industry’s marquee event.)

Have a few more images and thoughts to share:

Elevations. As a native flatlander born in Chicago, the prairie landscape in and around my hometown leaves little opportunity to enjoy a distant vista, unless you’re at the shore of Lake Michigan and want to scan the horizon to see the steel mills across the lake in Indiana.  Not so in Seattle, which like most places out West — heck, like most places outside of the Midwest — is hilly.  Note the image below; reminded me of anywhere in San Francisco. 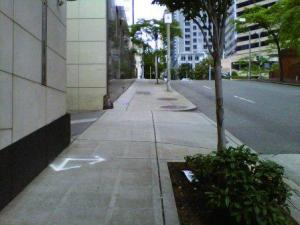 You can get a workout navigating the streets of Seattle.

The Big Hill. Located between two mountain ranges, Seattle has more than just hills.  It has some of the most spectacular mountains in North America — real mountains that are snow packed all the time. A friend asked in an email if I saw the famous Mt. Ranier during my stay.  Not really, since it rained a lot earlier this week.  But on our flight home Wednesday, I captured this image from seat 23F out the right side of an American Airlines 737.  Way cool, and I bet way cold at the summit.

The Museum of Flight. My business visit to Seattle wasn’t without some fun stuff. The Opening Party at the convention was held in a place that certainly was miles above your standard hotel or convention center ballroom: The Seattle Museum of Flight, located on the property where the Boeing Company was founded. Along with enjoying some great food and drink while strolling past all sorts of aircraft, I took in a few old black and white newsreels produced in the 1940s and 1950s.  Glad to read a sign that stated these short films really were propaganda messages and not news.  We’ve come a long way, baby, thankfully.

In the next decade or so, we’ll need a place to retire.  Not sure if I want to spend my “golden years” here in my beloved Chicago. Travel gives one an opportunity to experience new places for the moment, but an opportunity to perhaps gain insight into where you’ll live next.  Will our next move be to Seattle?  Not sure, but I’d welcome an opportunity to return.

Will bring an umbrella next time, though.  Have you given thought to where you’d like to retire?  Share your thoughts. 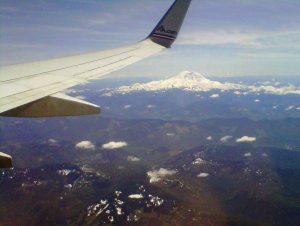 The Seattle Museum of Flight is a place that really soars.

This post is a milestone of sorts. I’m writing to you today from Seattle, Washington. I guess that makes me a “blogger/correspondent.”  Actually, the PRDude has published “travelogue” type of of posts before, most recently, a two-part blog on our March vacation visit to San Juan, PR. But this is my first “on-the-scene” chronicle.

Also, this is my first visit to the Emerald City, and I’ve had a few days to make some observations.

The Weather. Yes, it rains a lot here. Rained the first two days, but not much since.  But the rain is a steady, almost gentle drizzle borne from some very low-hanging and slow-moving clouds that blow in from the west.  Seattleites don’t appear to be bothered; many forgo umbrellas and just wear hooded rain jackets.  Unlike New York, where mysterious umbrella sellers appear at the first drop of rain, no one sells umbrellas on the street in Seattle.  What they do have here that I’ve never seen elsewhere: Awnings that jut out from many of the newer buildings.  Practical and ingenious.

This is not the “first” Starbucks, but it’s an actual “Seattle” Starbucks.

Downtown.  From our downtown business hotel, it’s apparent this place is fairly prosperous.  The business district is fairly compact and comprised of handsome modern office towers and the requisite high and low-end chain restaurants and stores, along with some excellent local eateries and shops. That’s what successful enterprises in aviation, software and coffee will do to an economy. There’s a definite atmosphere here that whispers rather than shouts “Seattle!”; it gets magnified, however, when it rains.  And, we didn’t see much litter or stifling traffic.

Why don’t other cities have cool awnings like this?

Coffee. Yes, they have lots of Starbucks, Seattle’s Best and other independent coffee shops here.  We’ve visited a few. All serve really good coffee.  Don’t believe Seattle invented the coffee shop concept, but they certainly institutionalized it.  Unlike some cities, where there’s a Starbucks on every other block, here, there’s two Starbucks on every block.

Water. Seattle has a lot of water, and not all of it falls from the sky.  There’s the Puget Sound to the west and Lake Washington to the east. And, there are a lot of things to do on the water, like sail a boat. Didn’t see anyone swimming in the waters, thought. 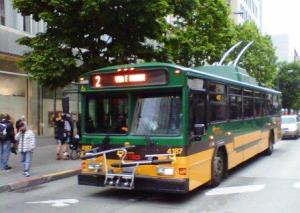 Wouldn’t you like to ride on one of these cool electric buses?

People. Most of the people we’ve met were friendly and proud of their city. Yes, there are some derelict types and homeless, but none were aggressive.  We felt sorry for those that didn’t have anywhere to go in the rain.  Seattle people smile a lot and say “hello.”

Electric Buses. Seattle doesn’t have a major rapid transit network, like my native Chicago.  But it does have something Chicago used to have — electric buses. I remember riding them as a kid and enjoyed the “woosh” kind of sound they made.

Pike Place Market. I didn’t get to visit the Space Needle (or many other cool Seattle attractions like the Ballard neighborhood) but we did get to visit Pike Place Market, the famous venue that’s been around for decades.  Saw the stand where the guys shout and throw fish around.  Learned from a local that the market is much more than just fish, flowers and food. It’s a self-contained community, with more than just shops: Day care, market rent apartments, counseling for those in need.

The PRDude with Pike Place Market in the distance.

From a perception perspective, I think Seattle will rise from a place where it rains a lot and coffee is prevalent. There’s an energy here, even though Seattle’s most famous citizen may be Seattle Sutton.  (Note: Perhaps they can benefit from an effective public relations campaign?)  Some cities are places that “you should have visited 20 years ago.”  Not Seattle.  I’m glad I visited it and hope to return when I’m not working a convention.

Now, it’s back to basics: commenting on public relations or references to the practice.  An online post that appeared a few days ago sparked my interest, while at the same time brought on borderline rage.

Here’s a link to the post in question, which appeared twice this week in an online newsletter published by Commpro.biz. The commentary actually is well-conceived and I somewhat agree with the author.  But there are two aspects of the headline that I find offensive, inaccurate and inflammatory:

The author was offering a critique on President Obama’s comment, “The private sector is doing fine,” in relation to jobs and the economy.  The President made the comment at a news conference June 1.

1.  Let’s start with the use of the word “horrific.” I visited the Free Online Dictionary site and found this definition for the word: “grossly offensive to decency or morality; causing horror.”

Now it’s your turn.  When you think of something that causes horror, does a presidential news conference come to mind?  Not me.  Perhaps a mining disaster, or what’s left of a town following an F-5 tornado, but not some perhaps poorly chosen words from an elected official, even if he’s the leader of the free world.  The author even offers seven reasons why the six words spoken by the President constitutes “a horrific blunder.”

My response to this blatant hyperbole:  “Horse feathers,” but you can fill in another word that means the same thing.

2. The President made the statement in question at a news conference.  He was fielding questions from newsmen and women. That’s part of his job.   He was not practicing “public relations,” at least as I define and envision effective modern public relations to be.

Professional communicators who craft strategies and distribute messages on behalf of the President and his administration practice public relations.  Perhaps the President made a political blunder, but I don’t believe it had anything to do with public relations, which too often gets lumped with anything that goes wrong.  Read my post on the fallout from the 2010 Gulf oil rig tragedy to get another perspective.

Those of us who truly believe in the value of effective public relations should muster our collective resources to comment on situations like this one.  Otherwise, we’ll continue to shake off the derogatory references to “flack” and “spin doctor.”