First, in the spirit of ethical public relations, let me disclose this: The first part of the title of this post* was borrowed directly from a U2 song of the same name.  It’s a track from the the Irish quartet’s fourth album, An Unforgettable Fire. This atmospheric body of song was the first step in U2’s unwavering decision to explore and tread in new musical waters.  Plus, view the video: It’s probably the last time you’ll see Bono with a mullet and sans sunglasses; also, The Edge still played that cool Gibson Explorer guitar and did not yet take up the ski cap he wears all the time these days.

Enough.  Except that I witnessed U2 during the War tour and was enthralled by their energy, creativity and sincerity.

Celebrating another year with a pint of Staropramen, a great Czech pilsner, at the Chipp Inn.

A few days ago, The PRDude celebrated a birthday.  It was a quiet, unspectacular affair, just Susan and I enjoying a quiet dinner and nightcap.  But the location was very special.  We opted for a hip new “American bistro” called Branch 27.  It’s located in a neighborhood of Chicago called West Town, and it’s the place I spent the first 19 years of my life. 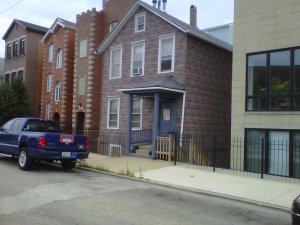 This is the home where I spent the first 19 years of my life. It’s one of the few “vintage” houses still left on the 1300 block of West Walton Street.

Yes, the meal was delicious and the conversation wonderful. But what stood out to me was how the old neighborhood that so much sculpted the person I’ve become had evolved from a place where so many of us want to get away from to one that attracts those who now call Chicago home.

From our table, overlooking the intersection of Chicago Avenue and Noble Street, I saw some of the familiar: The #66 Chicago Avenue bus, people swimming at the Ida Crown Natatorium in Eckhart Park and Hispanic families with kids in tow.  I rode the #66 bus many times, swam in the pool at Eckhart Park on hot days and had many Hispanic kids as friends and classmates.

After dinner, we strolled west a few blocks on Chicago Avenue to get a better perspective on the unfamiliar. The shops that housed Jewish-run department stores, butcher shops (with sawdust on the floors), stores that sold live poultry and a liquor store run by a Polish guy named Casey Koleta were gone. In their place were wine shops, a restaurant named after an heirloom tomato, a nightclub that doubled as a beauty shop and, you guessed it, more restaurants.

But Holy Innocents parish, one of the predominantly Polish churches that defined the neighborhood for generations, is still there.  The big Romanesque Revival bell towers dominate the horizon south of Chicago Avenue, and I trust on Sundays mass is said in Polish and Spanish.

The Chipp Inn, looks pretty much the same after all those years. But the beer selection is better.

Another constant from that “bygone” era was The Chipp Inn.  There on the corner of Greenview Avenue and Fry Street, the small working-class bar looked pretty much the same as when me and my buddies would hang out there in the late 1970s, drinking Old Style and other mass-produced beers that sold for around a buck a can. (They have a much bigger beer selection now, including the excellent Staropramen from Czech Republic on tap.)

It was a time when West Town still was the home of some  Poles, Ukranians and other people of Eastern European heritage; it was those people — factory workers and foundry workers, like my late father — who settled West Town and helped build Chicago.  Many never “got out,” like my family did to find safer, greener streets.

We now live around three miles from West Town, in a neighborhood called Avondale.  (Read my “travelogue” about our sister neighborhood, Logan Square.)  It’s a fine, relatively leafy place that, like West Town, had its struggles but has turned the proverbial corner.

Growing up, West Town was not always a pretty place.  There were gangs, drugs and advancing urban decay.  But somehow, the old neighborhood survived and is home to new Chicagoans and their children, to new entrepreneurs and to new ideas.  Unlike some parts of Chicago, West Town is still somewhat intact. Hey, there’s even a chamber of commerce.
In the weeks to come, I think I’ll have more “homecomings.” I’d like to think that in some miniscule way, me and many others who were born and raised in a place like West Town contributed to its evolution. Have you had a similar homecoming?  Please share your story.

Minutes from now, a billion or so people from around the world will take in the pageantry of the Closing Ceremonies of the 2012 Summer Olympics in London.  Some 80,000 will be on hand at the Olympic Stadium, and the rest of us will be forced to watch the event on television.

Spoiler Alert: Don’t click on the links above if you want to be surprised and not learn the names of some of the artists scheduled to perform.

The PRDude has other plans and will not watch the festivities. Although he would have attended the event in person, if there was a bankroll of around 5,000 British pounds, or $7,100, in discretionary funds available.  Alas, this princely sum was not readily available.

But I did watch the Opening Ceremonies some two weeks ago, and I caught some of the athletic competitions.  After all, the Olympics are about competition, with a lot of pomp and circumstance thrown in.  And, the British certainly know how to pump up the pomp; what’s more, they’re not shy about surprising us with the circumstances.

In the months leading up to the Olympics, there was speculation of gridlock, whether the London was ready, and even worse, terrorist attacks at some time during the games.  Fortunately, that has not happened.  From a public awareness perspective — something most call “public relations” — the British and London look pretty good right now in the eyes of the world.

Like any gathering of people from around the world, there was glory and there were goats.  Here are a few:

Glory:  U.S. gymnast Gabby Douglas, who proved African American young women can earn a gold medal in gymnastics, and Wojdan Shahrkhani, the first Saudi Arabian woman to compete at the Olympic Games; she lost her judo match to a much more skilled opponent, but she demonstrated courage well beyond her 16 years.

Finally, tonight’s Closing Ceremonies will be bittersweet. The custom, of course, is to pass the Olympic flame on to the next host city; that will be Rio de Janeiro.  If you remember, my home town of Chicago was a finalist, but lost out when the decision was made in October of 2009.  Ah, what could have been the world focus here in 2016 did not happen. 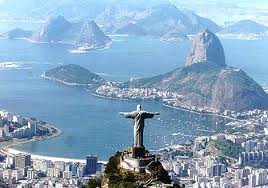 We learned, we moved on.  All the best to Rio in 2016.  I hope they are as successful as London, and teach the world to samba.

With questions still being posed following the murders of innocent people at a theater in Colorado, more of the same types of questions will be asked following the shooting deaths of six members of a Sikh congregation August 5 in a suburb south of Milwaukee.

Why did the gunman commit this horrific act?

Why did he target people of the Sikh faith?

Where did he get his guns and ammo?

Why wasn’t he stopped beforehand?

Lots of questions, and really not a lot of time for answers.

But here’s another question that’s related to the Wisconsin man police say indiscriminately slaughtered people on what should have been a peaceful Sunday morning: Why did he and other reported white supremists help spread their message of hate through rock and roll? Read more about the way rock music is used by hate groups from this piece from Reuters.

Rock and roll has played a big part of shaping my life, and it still does today. Its roots are in rebellion and following a different drummer, so to day.  But I strongly doubt that the architects of rock and roll — from little-known blues and country players to Chuck Berry and Buddy Holly — ever fathomed the music they helped create would be used to spread messages of hate against people who have done nothing to provoke it.

I’ve blogged previously about other mass murders — the Fort Hood shootings in November of 2009 and the shootings in Arizona in January of 2011 that left six dead and and several wounded, including Arizona Congressman Gabrielle Giffords.  There’s been no common threads, except of course that a crazed, deranged individual with access to firearms murdered people he probably didn’t know.

Now, with the carnage at the Sikh temple in Oak Creek, Wisconsin, music is factored into how the latest crazed, deranged individual shared what drove his madness.