On May 28, my friends and colleagues at PRSA Chicago hosted an interesting breakfast workshop that addressed one of the oldest forms of communication — storytelling.

Our speaker, Rob Biesenbach, certainly had the credentials, boasting an impressive big agency background and successful career as an author and consultant.

Along with more coffee than I should drink in a day and a huge breakfast panini, here’s what I learned about storytelling  following this excellent presentation.

Stories can be spoken (the original format, I believe) written (the format that came next) and recorded (the way many of us today absorb them).  But they’re at the heart of all communications.

Too often today, those of us who are in communications disciplines lose sight of that fact.

Now that I got your attention, did you hear the one about the PR blogger who had childhood aspirations of being a baseball player, astronaut or secret agent but couldn’t run, throw, hit or field very well?  And was afraid of heights and didn’t look good in a tuxedo?

Ah, that’s a story for another time.

So, what’s your story?

A recent local news story struck a responsive chord with me, and I’m sure a lot of other people here in metropolitan Chicago and elsewhere.  The issue: A breach of ethics and poor judgment among some high school seniors involving a mandatory requirement to perform 24 hours of community service as a prerequisite for graduation.

As I’ll explain, this instance of “kids behaving badly” has another perspective.

Here’s what happened.  As reported extensively by Chicago media, around 40 graduating seniors from Oak Lawn Community High School allegedly paid a classmate to forge a signature on documents related to the completion of the community service requirement.  View this report from the local CBS television affiliate for more details.

Yes, these kids messed up. They made a mistake, and they’ll pay for it by not being allowed to don the cap and gown with their peers — those kids who actually spent the required hours at a nursing home, pet shelter or local business.  (Sidebar: The reportedly forged signatures were those of a golf course manager; come on!  What’s so hard about helping out at a golf course?)

Clearly, these students tried to get away with something.  But in the end, they violated a standard and brought shame on themselves, their families and their school.

But too often today, it’s mainly the younger generation — the so-called Millennials — that get bashed for lacking the same morals and character as those of us from previous generations. In the case of a handful of the 2014 graduating class of Oak Lawn High School, that’s true.

In an effort to support my contention with more than anecdotal evidence, I ran a variety of Google searches and found lots of reports about kids lacking ethics, especially while online, as found in this Mashable post citing a Harvard University study.

However, a decline or lack of ethics transcends Millennials.  Here’s an

When Susan and I moved to our home in the Avondale neighborhood 14 years ago, we noticed neighbors two houses west had restricted parking signs in front of the home. The City of Chicago allows this privilege for residents with disabilities — in essence granting that person the right to park there.

The issue: We rarely, if ever, saw a car parked in that spot. Later, we learned that two elderly women lived in the home and secured the restricted designation so their son — who visited a few times a month — could park in the space.

Was this a breach of ethics, an absence of moral principles governing good citizenship and conduct?  Without question, and from two people who were part of the so-called “Greatest Generation.”

As I’ve stated many times in this blog, those of use who are serious about the practice of public relations prescribe to maintaining the highest ethical standards at all times.   Those of us who earned the Accredited in Public Relations credential pledge that we’ll provide ethical counsel.

Hopefully, the Oak Lawn High School students embroiled in this issue learned a lesson.  As for our elderly neighbors, they sold the home and moved years ago. Shortly thereafter, the parking signs were removed from the ground.

Here are two other posts from The PRDude that reference the Avondale neighborhood of Chicago:

1. An August of 2013 post about disturbing messages found outside.

2. A July of 2013 post about sitting on the front porch and enjoying all things natural.

On Tuesday, as I was heading to help facilitate a work group for local professionals planning to earn the Accredited in Public Relations credential, I came across a man known to many in Chicago for two things: His wardrobe and his personality.  Our brief encounter inspired this post — the subject of which will follow shortly.

Vincent P. Falk in one of his many, many, many colorful outfits. I’ll bet he doesn’t own a pair of blue jeans.

The gentleman in question, Vincent Falk, is pretty easy to spot because he wears what I believe are “zoot suits” of every color in the rainbow — and then some.

I chatted with Mr. Falk at one place where he often holds court: In front of the WLS-TV Channel 7 newsroom on-air studio, which abuts State Street near Lake Street.  Like many passersby, he hopes to get some screen time during the closing newscast credits. After asking if I could take his photo, Mr. Falk agreed, complimented me on the red golf jacket I was wearing and offered me the opportunity to don his jacket.  I politely declined: The jacket didn’t go with my trousers.

(This excellent post by the late, legendary Roger Ebert provides more on Mr. Falk, and the images are better.  My trusty BlackBerry Curve has a crummy camera, but I still love it.)

I told Mr. Falk I would like his image for my blog, but I wasn’t sure what I’d 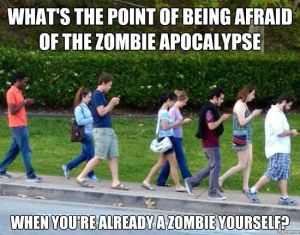 write about. After a conversation punctuated by pun after pun uttered by this amiable, unconventional man, this became pretty clear to me:  Will people like Vinnie Falk — a true character if there ever was one –continue to find a home in a Chicago that I maintain is losing its character to conformity?

If this popular image above (probably not taken in Chicago) is any indication of the potential for future “characters,” I don’t think so.

The Chicago I was raised in was, indeed, a city of neighborhoods, most boasting people who were iconoclastic in their own humble ways, like Mr. Falk.  These were neighborhoods of two-flats, corner taverns and mom-and-pop groceries, neighborhoods where people lived for generations.  A person could be decidedly left-of-center, okay weird,  and still be accepted, still fit in.

These places hardly exist anymore, as communities like Lakeview, Wicker Park/Bucktown and increasingly Logan Square have evolved into urban theme parks, the price of admission being a $3 doughnut, $9 beer and two-hour wait for brunch. Conformists — not characters — come from these places. The thought of hanging around for generations is remote at best to many new Chicagoans.

In June, I’ll head back downtown after work to co-facilitate the APR prep class. I’ll pass the Channel 7 studios on State Street and hope Mr. Falk is there, waiting for the 5:00 p.m. newscast to end.

This time, if he offers, I’ll gladly try on his jacket.

The news yesterday was stupefying for Chicago aficionados of “encased meats” and those who enjoy long waits to get something to eat: Hot Doug’s, the so-called “sausage superstore,” will serve its last dog this fall.

The legendary Doug Sohn, behind the counter of his soon-to-be-shuttered hot dog “superstore.”

A collective wail spread through the food-loving community, a demographic that never ceases to amaze me with their quest for edible products that are unabashedly hip, generally expensive and usually requiring a lengthy wait to purchase.    This aptly-named Chicago online source even reports on the “reaction” by Chicago’s food community to the closing on what basically is an upscale hot dog stand.

I pray those who will crave a Hot Doug’s rattlesnake dog topped with fois gras will find a suitable alternative when the establishment shuts for good. (In the full disclosure department: I dined at Hot Doug’s once and recall the dog and fries were pretty good, but not worth the 45-minute wait.)

But back to the purpose of this post: Hot Doug’s is located in Avondale, and fortunately, media reports on the story — from both traditional and digital outlets — identify the establishment as being in Avondale.

It’s where I’ve lived the past 14 years, a neighborhood often overshadowed by its sister neighborhood to the south, Logan Square.  Avondale is what  Brooklyn is to Manhattan, what St. Paul is to Minneapolis: Grittier, edgier and perhaps to some, less cultured and less expensive.  Many never heard of Avondale, or just lumped the neighborhood in with its wealthier neighbor.

But perceptions — like real estate values — change over time, and Avondale is now hip. Read this Chicago Sun-Times piece for details.

Not to knock Logan Square: Susan and I lived in a wonderful apartment in a greystone on Logan Boulevard for eight years and were very content.  But it wasn’t ours, and when time came to purchase, we found a wonderful home  in Avondale — just a block north of the formal boundary between the two  neighborhoods.

In fact, we’ve been in our Avondale home a little longer than owner Doug Sohn has held down counter duties as Hot Doug’s.  So, we were pioneers of living in a neighborhood on the cusp of cool even before Mr. Sohn.

So, thanks Mr. Sohn for helping to build awareness for Avondale as the next bastion of hipness.  But remember, we were here first.