The article hit home like a virtual thunderclap. Well, for me and perhaps the many others who communicate professionally and ethically.

In question is a piece, “2018’s Biggest Social Media Trends for Business,” published January 2 of this year by Forbes. (Yes, I’m a little behind in my reading.) 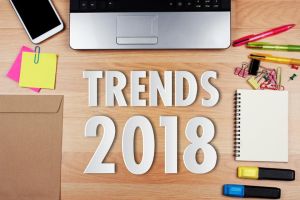 For a commentary on the growth of digital, there sure are a lot of “old-school” implements in this graphic. Image courtesy of Forbes.

Here’s why: Author Ryan Holmes (also the CEO and founder of Hootsuite) maintains that there’s “a growing realization among businesses that social media is the single most effective way to reach audiences.” He cites factors like the development of paid platforms (so long free reach via Facebook), a continued growth of video (certainly not surprising) and the integration of prominent social media platforms with leading business software (perhaps Microsoft will own everything digital some day).

And, the article cites compelling statistics like the escalating number of Facebook users (lots and lots and lots), time each day teens spend online (around 540 minutes) and the growing dominance of sponsored video (more bucks spent than on that once dominate medium — television).

All this led me to ponder these questions about the future of social media:

1. All these developments are happening at lightening-fast speed. So  how do communicators measure results and effectively keep up?

2. And, given the preponderance of new digital platforms, how do communicators determine if what they recommend to clients is the most relevant one?

3. Not too many years ago, I recall reading that the public relations field “owned” social media. Is that still the case?

4. How do you effectively integrate rapid-fire digital with more traditional strategies and tactics?

5.  Will those of us not raised on digital (this writer included) continue to have a voice in modern communications?

In the conclusion to the article, Holmes offers this rationale: “For companies already fatigued by the onslaught of new technology and strategies, relief, unfortunately, is nowhere in sight. But for those that can keep up, social media may promise bigger audiences and more return on investment than ever.”

Not sure where I stand in that equation.

Now it’s your turn. Given the virtual communications whirlwind ahead, what questions do you have about the impact of social media on communicators?

Fans of the Chicago-centric evening television dramas aired on NBC have had to opt for other entertainment sources the past few days; that’s because the network gained the rights to broadcast the many kinds of athletic endeavors taking place on snow and ice halfway around the world during the 2018 Winter Olympics in PyeongChang, South Korea. 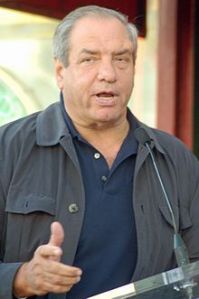 Who knows? Perhaps Mr. Wolf was using this downtime to conceive a new program set in Chicago. Photo courtesy of Wikipedia.

So those of us (me included) who enjoy hour-long programs like Chicago Fire, Chicago PD and Chicago Med — all developed by the indefatigable executive producer Dick Wolf — now must focus on ice dancing, curling and the luge competition during the 9 to 10 p.m. hour or switch to one of the hundreds of other viewing options available to cable subscribers these days.

This entertainment quandary prompted these questions: What’s Mr. Wolf and his team doing during this hiatus of his very popular and successful Chicago dramas?  Perhaps plotting a new “Chicago” program, one with an ensemble cast and plot lines that are “torn from the pages” of real news happenings, with our fine city as a backdrop?  If so, what would be the focus, the industry, the profession?

I have a suggestion: Chicago PR!

Yes, an hour-long perspective into the lives of the men and women who craft strategies and manage communications for companies, businesses, governmental agencies and associations across our great metropolitan area.

Think about this for a moment.  The name, Chicago PR is succinct, memorable and easily recognizable, like the names of the other dramas produced by the team at Wolf Films.

In terms of worthy characters, I’ve known plenty of public relations professionals who would serve as models for a fictional Chicago PR agency: The stalwart and decisive founder and leader, the old-school senior VP who’s grappling with the ever-changing digital arena, the progressive young account supervisor who just earned in integrated marketing communications degree from a leading university.

Granted, Chicago PR plots won’t involve catching bad guys, rescuing people from burning buildings or saving the life of an accident victim; but anyone who’s worked in the high-pressure public relations business knows there’s always the potential for drama to be found inside the office and outside of it.

Anyone who’s been part of a new business RFP could certainly relate to the drama that usually unfolds.

And, in the full disclosure department, this blog has addressed public relations as depicted in Chicago Fire. As I noted in my final post of 2017, the profession was grossly misrepresented in an episode involving a lead character from Firehouse 51.

So, should Mr. Wolf read this commentary, please consider the program suggestion just noted; but if you do, please confer with real public relations professionals from the onset. Get it right this time.

As for me, I’m switching on the Olympics coverage. Linsey Vonn is going for gold. The balance of the evening, I trust, will be all downhill.

Sometimes, I have to gaze up at the ceiling, so to say, to find the subject for a PRDude post. And, other times, the topic surfaces in an expected place and figuratively bashes me across the forehead.

The subject of today’s post lies squarely on the latter. 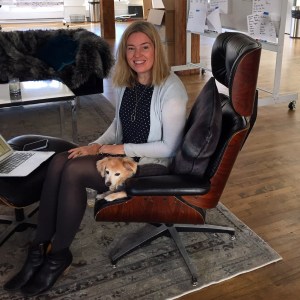 Photo of Ms. Heffernan courtesy of Wikipedia. Not sure of the name of the four-legged friend.

While reading my print edition of the Chicago Tribune during lunch today, I found an opinion piece that focused on Hope Hicks — the current White House communications director — and offered a commentary on public relations.  You can read the digital version of the article, “Who Exactly is Hope Hicks?, posted on the Tribune’s website and dated February 5.

The commentary, written by  Virginia Heffernan, opens with an account of President Donald Trump’s reported affinity for women models — from his current wife Melania and daughter Ivanka to other women who are currently part of his administration and staff. Then the focus moves to Ms. Hicks, specifically her experience as a fashion model and position managing communications for The Trump Organization.

What follows the introductory paragraphs provided the fuel for this post. Frankly, the piece is an example of myopic, uninformed and outright erroneous interpretations of the public relations practice and an assault on the professionals who adhere to established standards of ethical and strategic communications.

Rather than dissect the editorial paragraph-by-paragraph to unveil all I believe is wrong, fictitious and plain idiotic, here are a few “gems” of sorts that demonstrate Ms. Heffernan’s preconceived perceptions of public relations and the people who work in the industry:

In an effort to provide some guidance to Ms. Heffernan, perhaps she should visit the Press Contacts page published by the New York Times. There are eight communications professionals listed.

Perhaps one of these colleagues could share some accurate insight on public relations. Otherwise, Ms. Heffernan could visit this page hosted by the Public Relations Society of America.