By Edward M.  Bury, APR (aka The PRDude)

Tonight, The Food Network, which has given the culinary curious some pretty good shows like Chopped and Iron Chef America,, will debut a new one: Cutthroat Kitchen. 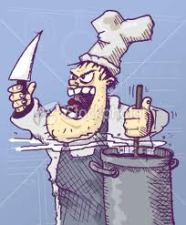 Is this the kind of contestant that will appear on Cutthroat Kitchen?

Since chefs frequently wield sharp knives, I first thought this show would be something akin to The Ultimate Fighter kind of competition, only by tattooed people who can produce decent veal stock and can define the Maillard reaction.  After seeing TV promos and reading more, I stand corrected.

Hosted by Alton Brown, the program, according a web posting, is structured around “the element of a game — one that includes sabotage, scheming and backstabbing.”  (I trust the “backstabbing” part does not involve a 10-inch chef’s knife.)   There’s more:  each of the four contestants received $25,000, “money that can either be kept as a potential prize or used toward sabotage and the purchase of items/challenges.”

This concept has all the appeal of a rotten egg on burnt toast served with stale, cold coffee in a cracked cup.

Here’s why. The entire “food/foodie/celebrity chef” phenomenon has evolved — make the “devolved” — food programming into “competitions” designed to incite, appeal to the lowest common denominator and show a disregard for precious food and the skills, dedication and work required to prepare food for consumption.

Cutthroat Kitchen, which I don’t plan to watch even out of morbid curiosity, is just one of a seemingly increasing number programs that reflect poorly on the culinary arts and those who call themselves chefs.  I can learn something from a show like Chopped, like how to combine ingredients that don’t make sense into something that tastes good.

Wouldn’t you rather watch and learn from this chef?

What will I learn from Cutthroat Kitchen?  How to steal someone’s butter and ruin his or her souffle?

Too much attention is given to recent prime time food programming that goes beyond cooking and slides into headlong into unadulterated snark. True, there are still many “how to” food programs aired these days, but few in the evenings.   Read this 2011 post for my thoughts on two entertaining TV chefs who made an impression on me years before chefs held celebrity status.

Perhaps the minds at The Food Network and other networks will take the initiative to produce a program based on Take Part, a movement where eight great chefs work to end hunger in America.

In its essence, food is all about addressing hunger, is it not? And, it’s tremendous that many today take pleasure in cooking.  After all, Julia Child did not write “The Displeasure of Cooking.”