By Edward M. Bury, APR (aka the PRDude)

The tourism board for our neighbors to the north had a slogan that really resonated with me, especially this time of year, with the madness of holiday cheer and crass commercialism at its zenith.  It beckoned me to “Escape to Wisconsin.”

So that’s what I did this weekend:  Packed up the Camry, drove north and spent two nights just over the border from Illinois, but worlds away from a mindset perspective.  Besides, I had vacation days to use up and didn’t want to just hang around the house.

Wisconsin has been in the national spotlight lately with the efforts underway to recall Gov. Scott Walker, and the Governor’s push to reduce the power of unions.  The PRDude addressed the latter in this February post.  But despite its new-found national prominence, Wisconsin remains for me a pretty cool place to visit, especially with the crowds gone, the roads empty and the air fresh and crisp.

My Wisconsin sojourn is illustrated by the images that follow.  But let me share a few thoughts about the Dairy State:

Me and Wisconsin.  We go back a long way. To the beginning, in fact. Family legend has it this way: My late uncle Eddie (who I’m named after) and aunt Helen (a truly wonderful person) ran a small resort on Silver Lake, a quiet little town an hour-plus from Chicago. My older brothers would spend parts of the summer at the resort, Happy Bill’s it was called, when my parents announced they were bringing up a surprise.  They thought it would  be a new bicycle. It was me.

Wisconsin Bars.  The center of any small Wisconsin town is the local tavern. Or, make that taverns.  There must be some kind of law that requires a specific number of bars per hundred or so persons.  The good ones have not jumped on the microbrew bandwagon just yet, and brands like Old Style and that western transplant Coors are all you can get.  There’s usually a few musky, walleye or Northern pike on the walls, a 10-point buck above the door and lots of knotty pine.  I stopped at one in New Munster for an Old Style.  I felt at ease.  The Packer game was on TV, but they were losing.  But there was conversation, and the patrons made this F.I.B (expletive Illinois Bastard) feel welcomed.

The Natural State.  My home state has some nice lakes, rivers, streams, woods and prairies.  But there’s something more “exotic” about the natural stuff in Wisconsin.  I spent time hiking along the Fox River and ended the day watching the sun set over Geneva Lake, a clear, deep lake that’s home to members of the Wrigley family, other billionaires, millionaires and even some common folk. They all can take in the same natural splendor that I remember from decades ago.  Things change in Wisconsin, but a lot of what nature provides stays the same.

Now, on to the show:

Horses in the barn of my friends Tom and Mary Jane at their home in Union Grove.

My friend Tom in the driveway of his home.

"There is beauty in the sliver, singing river..." Bob Dylan. 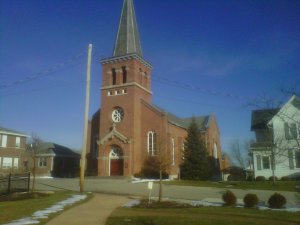 The corner of Main Street and Wrigley Drive in downtown Lake Geneva.

One of the grand homes overlooking Geneva Lake. 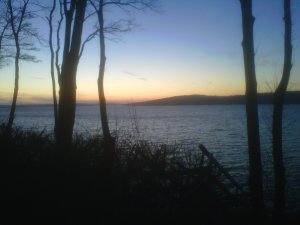 This view was taken along the hiking trail that rims Geneva Lake. 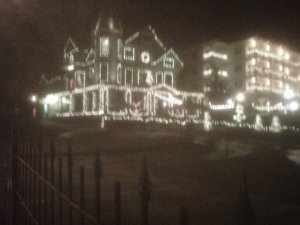 All dressed up for the holidays was this former mansion, now a hotel and restaurant.

Do you have any “Wisconsin memories” to share?  Have you “escaped” someplace this holiday season? Let’s start a dialogue.

Error: Twitter did not respond. Please wait a few minutes and refresh this page.