Here’s a statement that might strike many as being off-center, or just plain wrong: There are a lot of similarities between Galveston, Texas and my hometown of Chicago. Galveston you say?  Yes.

That’s where I spent a good part of the past Labor Day holiday, in Galveston in the company of my great friend, Butch West.  He’s a native Galvestonian, and he had great stories to tell about life in this Texas port city located on a 25-mile long island 50 miles east of Houston.  But first let me elaborate on the statement above.

Water. Galveston owes its existence to its location on the Gulf of Mexico. It’s one of the nation’s largest ports; tour the harbors and scan the horizon: You’ll see lots of commercial barges and tankers, cruise ships, shrimp boats and pleasure craft.  The wide, sandy beaches attract many for sun and surfing.  Chicago got its start due to its location on Lake Michigan at the mouth of the Chicago River.  We do a lot with the water around here, including drink it.

Architecture. Once Texas’ capital, modern Galveston was settled by European immigrants who built some pretty impressive stone buildings downtown, especially along the key commercial thoroughfare, The Strand.  Many late 19th Century structures — commercial buildings, homes and churches — still stand tall in the hot Texas sun.  It was cool to tour a building  (thankfully air conditioned) housing art galleries and learn it was built by a Scottish watchmaker.  You probably know Chicago is home to some buildings of note, many old and many new. The PRDude likes any town that preserves its past through its architecture.

The “Phoenix Effect.” No, I’m not talking about the city in Arizona, although I’ve visited there a few times.  I’m referring to how Galveston has rebuilt and rebounded from devastation, specifically the “unnamed” hurricane of 1900 and more recently, Hurricane Ike.  The 1900 hurricane, which struck on September 8 that year, was the nation’s deadliest natural disaster, taking an estimated 6,000 lives.  Ike hit on September 13, 2008.  According to Butch, “It’s not a matter of if, it’s when,” regarding the potential for hurricanes for those living on the Gulf.   We don’t get hurricanes in Chicago, but there was a pretty big fire here in 1871 that forever changed the city.

Okay. You might be thinking: “Hey, PRDude: Lots of cities are shaped by proximity to water, have a storied architectural history and rebuild following catastrophe.”  San Francisco and New Orleans are two that come to mind.  Well, I haven’t visited those cities recently, and by the way: This is my blog!  Enough narrative.   Below are some images taken during my three-plus days in Galveston.

Meet my friend Butch West. This image was taken aboard his boat, Therapy, during a cruise in the harbor.

A short drive outside town takes you to land that’s wet, flat and beautiful. This shot was taken close to Butch’s ancestral home. Birds and aquatic life still abound, even though new residential development continues.

Oil platforms and pleasure boats share the Galveston waterfront. I was amazed by the amount of wildlife that co-existed with commerce and industrial might.

One of the many outstanding late 19th Century buildings in downtown Galveston. Why hasn’t Hollywood used this place for a period film? 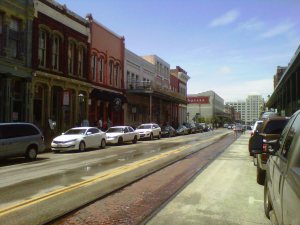 The Strand is worth an afternoon stroll. Note the train tracks, remnants of a bygone era. Did you know it’s legal to buy a beer and enjoy it while strolling The Strand? 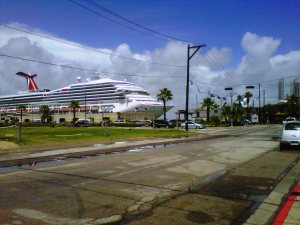 The Port of Galveston is Texas’ only cruise port. It opens a gateway for visitors who take in the city’s fine attractions — shops, sand, surf, seafood and more.

This shrimper was working the waters right outside the cruise ship port. Butch and his late Dad, Chubby, used to go shrimping years ago. Many Galvestonians take advantage of the natural bounty on the island.

A few final thoughts about Galveston:

One more thing: The title to this post is based on a popular song. Listen to it to get a better perspective on Galveston.  Now, it’s your turn: Do you have Galveston memories to share?