Sometimes, it’s the short, “filler” type of news stories that catch one’s attention  and — in this case — inspired commentary.

On Thursday, while scanning the Chicago Tribune Sports section, I read a one paragraph story about a Rhode Island distillery that resorted to a silly stunt to generate publicity. 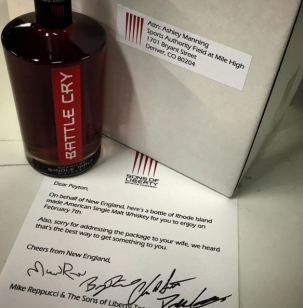 The distillery owners even captured their silly stunt on this image. And, note the signatures — more than likely those of the proud owners.

The distillery, Sons of Liberty, reportedly sent a bottle of its spirits and a snarky message to Denver Broncos’ quarterback Peyton Manning (care of Manning’s wife, Ashley) as a taunt, given the Broncos play the New England Patriots today in the AFC Championship football game. The winner, as you may know, goes to  Super Bowl 50 February 7.

Plain and simple, this stunt was mean-spirited, calloused and apparently not the result of a communications plan driven by ethics and strategy.

Read more about this “marketing initiative” from an online report.  The source is New England Sports Network. And, there’s more to the story, specifically an unfounded report that Manning took a growth hormone.

(Note to NESN writer Mike Cole: This stunt is not “well-played.” It’s garbage. And, it should have nothing to do with today’s AFC Championship game.)

A visit to the Sons of Liberty site did not reference the whiskey dispatch, but the Press Inquires link led to this email address. Through a little investigation, I learned the distillery has contracted DPA Communications of Boston for communications counsel.

Not sure if DPA Communications was responsible for this initiative; if the goal was publicity, they certainly succeeded.

But, I’d like to learn what is gained from this little campaign and how this effort builds awareness and acceptance of Songs of Liberty whiskey that leads to sales.

All I learned is that a producer of spirits resorted to a grandstanding effort that involved an athlete (and his wife) in order to gain some exposure.