Earlier this month, I completed another step toward my quest to add some other letters after my name, specifically “MA” for Master’s in English.

The next leg of the journey will be in the fall. So, yes, to quote the ‘70s Alice Cooper song, “school’s out for summer!”

Or more precisely, the Spring 2017 semester is over, and I can enjoy 90-plus days without having to read a book just about every 10 days. 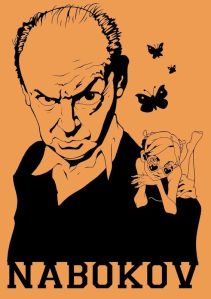 Image of Nabokov courtesy of gunsmithcat.deviantart.com. So what does this image signify? The author liked butterflies and wrote a book about a girl he named Lolita.

The 16-week course I completed focused on the writings of Russian/American author Vladimir Nabokov and other writers influenced by this legend of modern prose. Must say the class was very challenging, as I grappled at times with comprehending Nabokov’s themes and motifs. (Although I failed to fully comprehend why Nabokov would pursue the story line in Lolita and how he got away with changing narrators in some works.)

I learned a lot from our cool, engaging youngish professor, but also by observing some of my fellow classmates. Four are profiled here, identified by names I conjured up in a state of creativity.

The Jolly Scholar: A young fellow fellow clearly enraptured by literature, this colleague regularly shared keen knowledge of the assigned reading, espousing thoughts with a wit and wisdom beyond is years. An example of his commitment: He re-read Madame Bovery — a work not assigned — to be better prepared for the discussion on Flaubert’s Parrot.  Now, that’s dedication!

Slouching Girl: Clearly an intelligent person, this young woman demonstrated by her body language that she probably would have preferred to be elsewhere than in class. Consistent hair twirling gestures added to her mystique. Yet, when she did contribute, the thought added greatly to the class discussion; however, I had challenges comprehending comments due to her subdued, dulcet voice.

Goth Dude: Goth Dude looked like he just returned from a Cure concert, always sporting black attire and combat boots, always brooding. (I trust if there was a darker color of clothing available, he would have worn it.) But in all fairness, this guy shared very provocative insight and was the second smartest person in the room after the professor. Cool and staid, he consistently added thoughts to a notebook using precise penmanship.

The Marxist: Perhaps an uncalled for and unfair moniker, because I have no idea of this guy’s political ideologies. He was Russian, I believe, and he frequently defended his positions on Nabokovian (yes, this is a real school of thought among literary scholars) theory with a controlled fervor. For some reason, he favored t-shirts adorned with images of fictitious U.S. presidents and dead rock stars.

If you need more insight into why I’m pursuing an advanced degree, please read this post from July of 2016. By the way, I earned a B for the spring 2017 class — the grade I felt I deserved. My final paper can be found here.

So, what’s on the agenda for the fall 2017? Something a little less Nabokovian and more straightforward: Non-fiction writing workshop.